Capsinol nasal spray provides immediate relief from blocked sinuses and pressure in the forehead. Capsinol helps to breathe freely for a long time.

It makes the mucous membranes less sensitive to viruses and materials that cause nasal problems.

Capsinol nasal spray naturally strengthens the nasal mucosa and can be used for extended periods of time and is not addictive.

The formula is completely natural and not harmful to the nasal mucosa or health.

This is the most popular formula.

The formula is effective and long-lasting, and contains only natural ingredients that are good for the nose, such as xylitol, salt and capsaicin (red pepper).

The Original formula is spicy, but you get used to this feeling. Most people find it pleasant to use and are happy with the nasal spray. If you are still in doubt about how spicy it feels, we recommend that you start with the Mild Formula. If you don’t mind the spiciness, start with this formula. 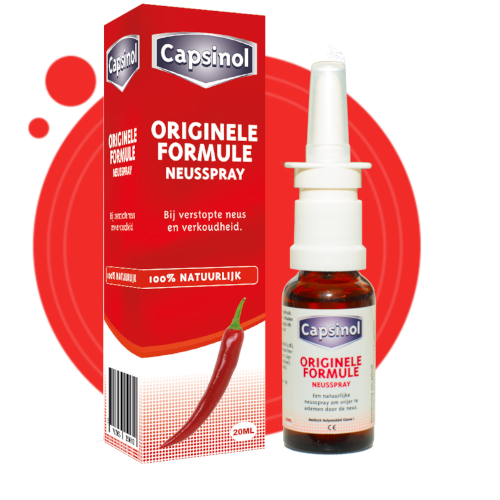 Capsinol nasal spray – how does it work ?

Capsinol nasal spray contains capsaicin. Capsaicin is the active ingredient in chili peppers that causes the hot sensation. Medical research has shown that capsaicin can have a positive effect on (chronic) nasal problems.

It can provide relief from chronic nasal congestion or a runny nose.

Capsaicin – what does it do?

Unsurprisingly, one of the ingredients is chili peppers. This makes Capsinol nasal spray quite hot and spicy (similar to a lick of strong English mustard). While it may feel a little uncomfortable at first, you’ll get used to this feeling eventually. Because we all have different tolerance settings, not everyone experiences the first use of Capsinol in the same way.

Capsinol has helped a significant number of people. For example, people with a chronically stuffy nose. There are also people who have become dependent on nasal sprays containing xylometazoline for years. For many of them, Capsinol provided the relief they needed. 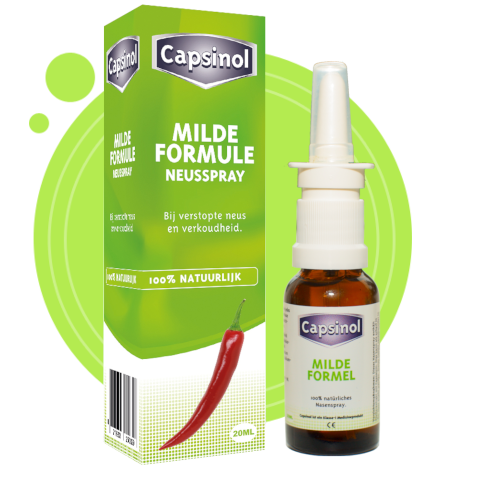 Capsinol mild formula is a good formula to start with. The effect is similar to the other two formulas, only this one is less spicy, the hot feeling of the pepper lasts shorter.

Capsinol mild formula also contains feverfew (feverfew). Feverfew is known for its beneficial effect on hay fever complaints and headaches. Due to feverfew, this formula is not suitable for pregnant women.

Getting used to, constructive effect

The active ingredient Capsicum provides the hot feeling. A slight burning sensation may be experienced immediately after use. And usually you will notice relief from your symptoms within 2-10 minutes. This hot feeling lasts for a few seconds and decreases with regular use.

The effect of Capsinol does not decrease, it is actually constructive. In principle, the stronger the more it seems to work, but not everyone needs or likes the strongest formula (extra strong).

Every person and every nose reacts differently. What one person finds too intense in terms of pepper, another can have just fine. Just like spicy food. You can judge for yourself whether you like spiciness or not.

If you don’t like the feeling of the pepper, we recommend starting with the Mild Formula. The original formula is the most commonly used variant. People who use these for a longer period of time switch to Extra Strong.

Capsinol Extra Strong has been specially developed for and by the experienced Capsinol user. It may happen that the nose immediately or after a while benefits more from a higher dose of capsaicin (red pepper). This formula is not suitable to start with. 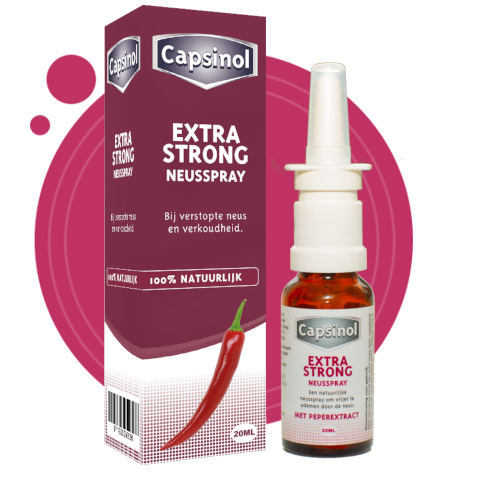 Capsinol also works well for rhinitis. Especially for people with chronic nasal complaints without an identifiable cause, Capsinol often has a lasting positive effect. Like the elderly who suffer from a continuous runny nose, for example, Capsinol offers a good solution for the complaints in many cases.

Capsinol can also offer a solution for (chronic) sinus complaints. The formula ensures that the nasal mucous membranes will clear up. It makes moisture that loosens the mucus. 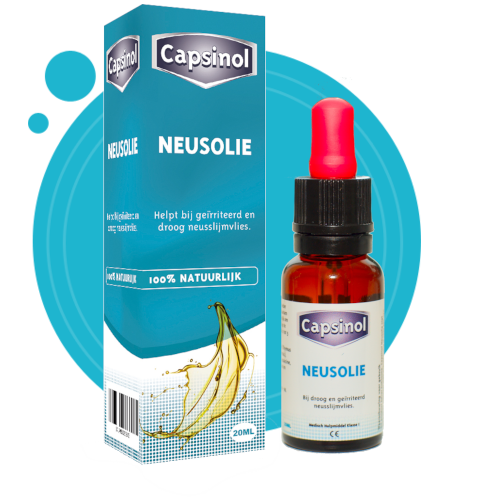 Capsinol Nasal Oil is a natural soft nasal oil for the treatment of dry and irritated nasal mucosa. For example, caused by a cold, dry air on airplanes or in air-conditioned rooms. The coconut oil acts as a barrier to prevent drying of the nasal mucosa.

In addition, the oil restores the moisture balance in the nasal passages and has a soothing effect on hard pieces in the nose. Capsinol nasal oil is fine and mild to use.

With a practical pipette for hygienic use.

This gentle and effective nasal spray reduces hypersensitivity symptoms and prevents nasal congestion caused by hay fever and allergies. The formula contains a strong natural anti-histamic (quercetin), and stops a hay fever attack in a short time. It cares for and places a protective layer on the nasal mucosa, so that pollen and other allergy-causing materials do not reach the mucous membrane. 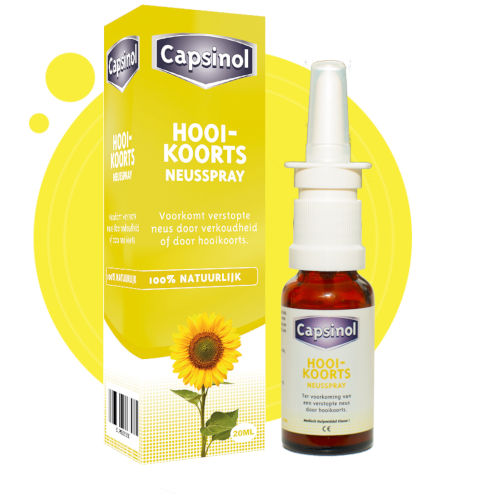 The effects – with a little patience

Most people will experience immediate relief after taking Capsinol. As an almost immediate response, it can allow you to breathe freely through the nose again. However, in some cases it may take a little longer for Capsinol to take effect.
We advise you to use the spray for at least two weeks (this is about one bottle of Capsinol). If you have not experienced an improvement during this time, the spray probably will not relieve your problems.

Every nose is different and reacts differently (if at all) to the pepper. Capsinol is not a panacea for all nasal problems. Sometimes nasal symptoms can even get worse in the beginning. This may not be the desired effect, but it does mean that your nose is reacting to the pepper. Therefore, some patience will be required as it is essential to continue taking Capsinol. As soon as the first unwanted side effect occurs, you may (temporarily) use another nasal spray. This can relieve your nose until the pepper produces the desired effect.

Capsinol is also effective for a short cold, especially if you prefer to use a natural nasal spray. We would like to note that a nasal spray containing xylometazoline or oxymetazoline usually provides faster relief from congestion.

As would be expected from a chili pepper ingredient, Capsinol Nasal Spray is quite hot and spicy (similar to a lick of strong English mustard). While it may feel a little uncomfortable at first, you’ll get used to this feeling eventually. Because we all have different tolerance settings, not everyone experiences the first use of Capsinol in the same way.

Capsinol has helped a significant number of people. For example, people with a chronically stuffy nose. There are also people who have become dependent on nasal sprays containing xylometazoline for years. For many of them, Capsinol provided the relief they needed.